I honestly was prepared to be a bit shell shocked arriving in India but the exact opposite occurred in Bangalore. I was enamoured by a city that was progressive, surprisingly green, friendly and cosmopolitan.  I discovered a city that has changed significantly in the past half decade.

I joked to local contact, and wine expert, Heemanshu about wanting to see cows roaming the streets freely in India and he laughed at me.  But sure enough they were there on our first day… just hanging out in front of a small grocery store in the middle of a shopping strip in the trendy little neighbourhood of Indiranagar.  And strolling down the streets as the craziness of Indian traffic weaves around them they are unperturbed by the hustle an bustle.

Bangalore had a cool character that I didn’t expect. I expected the cows, though I was surprised to see them meandering down an 8 lane road (note that lanes are definitely only a suggestion). I expected the hustle and bustle of the markets, the brightly coloured saris that are like a jewel box of colour, I expected the street food, the auto rickshaws- the clichés.   Beautiful clichés that they were…

What I didn’t have a context for was the big new malls, the funky bars, the amazing restaurants and micro breweries. The city was not as hectic as I had pictured, I kept hearing about the insane traffic but it really wasn’t that bad, the driving swerving in and out of lanes and beeping horns like they’re playing the bongos, now that’s another thing entirely and something I couldn’t get used to.

I asked a lot of the people we encountered about what they thought of their city. One great analogy compared Bangalore to Chicago in the United States, it’s not New York, but it doesn’t want to be. They have everything they need and more but there’s something more controlled, less frenetic, people are more chilled out, they seem to have more time and are less rushed in their day to day life.

Maybe I should be correct and call it Bengaluru but even though its name was changed in 2006 nobody calls it that so we continue with Bangalore.

Exploring the city to find our feet and find the colour footage we were after we visited top sites like the 500 year old fresh food markets, Lalbagh Gardens, Bull Temple, Commercial street, Bangalore Palace and we even through some brilliant contacts (thank you Priya) talked our way up to the very top of the UB City! 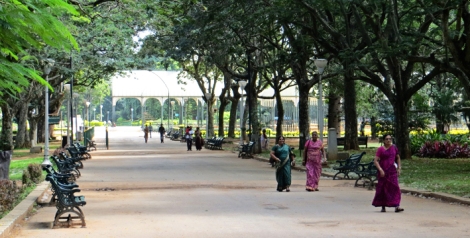 Sometimes we have to get creative with filming when security guards are lurking.