Lying on a plate in front of me was the head of a drunken pigeon, not what I would have ordered for my first meal in Hong Kong but as they say ‘when in Rome’… Actually I’m not even sold on the fact that this is the kinda foods locals would readily eat but I’m not one to back down from a challenge so after raising my eyebrows, and cringing a little I sucked it up and suck it down, so to speak.  Surprisingly it’s not that bad, though it was served cold which was strange and there was a lot of skin and bones.  It just tasted like the gray meat of a chicken, I wasn’t licking my fingers and going back for seconds but it wasn’t that bad. 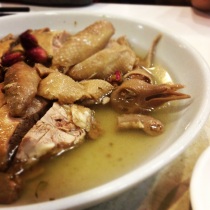 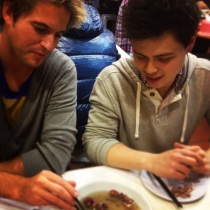 I’ve travelled to Hong Kong to work on developing a wine and food travel series with Wes Dening from WD Entertainment in LA.  I flew over from Australia with my boss KC, Peter Threlfall from TPD Media.  After dropping our luggage at the hotel in central Hong Kong it was off to a local no frills restaurant to meet Wes and the talent for our show, Eddie McDougall.  Eddie has a wine gallery in Hong Kong and is a master wine maker and guru on pairing vino with Asian cuisine.  He’s the perfect person to debunk the myths about Asian food and wine for the show that’s currently going by the same name as his store, The Flying Winemaker.

As we were in Eddie’s world it was his job to order, I knew he was going to challenge us and after the pigeon things got worse, or maybe I should say more interesting.  You’ve heard of the Dr Zeuss book Green Eggs and Ham?  Well I thought it was only a fictional description until the next plate came out.  Eddie said their name translated to 1000 year old eggs, basically they are buried in dirt (as I am lead to believe) and preserved somehow.  They come out with green yolks ringed in a coffee brown gelatinous goop and then around the outside they wrap prawn… who knows why? Dip it in a chilli sauce and that’s dinner… honestly if I hadn’t been at a table with a bunch of people and could have somehow snuck out a back door I probably would have wussed out of eating this kinda thing – actually I definitely would have headed for the hills.  Don’t get me wrong I love eating local when I travel however I often go for safer options  All eyes were on me, the challenge was laid down so I ate it, it was strangely creamy, not as pungent as I would have thought admittedly but the texture… even now it is making my stomach turn.  I think it is a bit mind over matter, honestly the taste wasn’t hideous at all but just not your usual Sunday night feed. 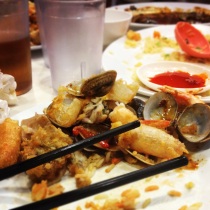 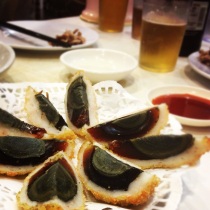 The Chinese banquet continued with clams in a rich sauce Wes went gaga over, egg battered prawns with the shell on (a new take for me on crispy skinned crab though I am not eating their heads and tails) and the last dish I knew would be the kicker.  It looked like Kentucky Fried Chicken but with the look on Eddie’s face I knew there was no way this was a dish that would have ever graced my plate in Brisbane… I was scared.  Eddie wouldn’t tell me what it was until I had a bite.  Wes tucked in, KC had no hesitation in trying it, I had no out, so I bit.  Inside the meat was white with dark veins… hmmm my mind ticked over.  It couldn’t be… ‘yep it’s frog’ Eddie confirmed. I pursed my lips and forgot what my mind was telling me about eating Kermit, ‘the French love it, it’s fine,’ I reassured myself.  So I took a second helping… apart from the bones it was actually good.

Frog, pigeon, preserved green eggs – a very surprising and gastronomically diverse introduction to the city.  Needless to say the team working on the Flying winemaker are ready for anything and I’ve got a great feeling about what we will achieve over the next few days in the city, I just don’t know if I can eat like this every day. 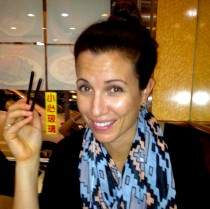 One response to “Green Eggs and Pigeon – arriving in Hong Kong”